What do extreme sports, biker gangs and CEOs have in common?

That’s the term coined by sociologist Stephen Lyng – also the title of Lyng’s book – to describe the high-risk experiences that he studied – from extreme sports to the wild world of outlaw motorcycle gangs – that take people to the edge of survival.

Central to Lyng’s definition of edgework is the human ability to redefine the natural response to danger as a set of complex emotions. Lyng describes how these emotions can mastered in order to achieve beneficial physiological and cognitive responses and, ultimately, an excellent physical performance.

What’s the essence of confronting danger? It’s the physiological exhilaration that keeps wingsuit gliders jumping of cliffs and ocean racers climbing yacht rigging in a gale.

Think of it as a superpower for the C-suite.

“Participants in many different types of edgework report that, at the height of the experience as they approach the edge, their perceptual field becomes highly focused: background factors recede from view, and their perception narrows to only those factors that immediately determine success or failure in negotiating the edge. In this state of mind, edgeworkers not only are oblivious to extraneous environmental factors, but they also lose their ability to gauge the passage of time in the usual fashion.”

We coach athletes to find that “space,” so they can focus all their energy on a winning performance.

In our executive practice, the same edgeworker traits provide analogies that are useful in understanding how to coach top-level leaders for competitive engagements.

1) Voluntary risk-taking. The ability to reframe risk as opportunity – an opportunity that is manageable with knowledge and experience. The edgeworker is highly attuned to their sport’s environment, the function and reliability of their equipment and, most importantly, their skills and capabilities, so that risk becomes far less important. Basically, if you know what you’re doing the risk really isn’t a factor. This way, all attention can be dedicated to performance.

This edgework skill is the ability to maintain control over a situation that verges on complete failure, a situation most people would regard as entirely uncontrollable. This gives leaders the ability to avoid being paralyzed by fear and the capacity to focus their attention and actions on what is most crucial in the moment.

2) A sense of uniqueness and pride. Edgework is important to define and reflect the edgeworker’s sense of self and identity. As with edgeworkers, CEOs lead a life that is engulfing and demanding, so much so that more executives avoid it than seek it. Those who do attain top leadership tend to stay in it, as long as it satisfies their “edgework” needs.

Similarly, extreme sportspeople continually seek the performance “high” as an escape from overly institutionalized society. Lyng wrote: “From the perspective of those who practice edgework, this activity is a rational and therapeutic way to respond to a sense of helplessness in the face of social-ecological threats because they believe that edgework is dangerous only to those who lack the survival capacities required for successful outcomes.”

3) The desire to test the limits of performance. In extreme sports, this can include technologically advanced equipment or vehicles, the adversarial environment (ocean, thin air, mountain face), as well as the edgeworker’s own strength and endurance. CEOs report being motivated by similar challenges even more than financial compensation.

A CEO may never want to base dive with a parachute, but they have to thrive on making business negotiations, acquisitions and organizational change, in which failure can cost a career.

The job of the mental performance coach is to help the leader find the thrill of the “edge” while tuning out the anxiety and fear, so it can be mastered and applied as a competitive advantage in business. 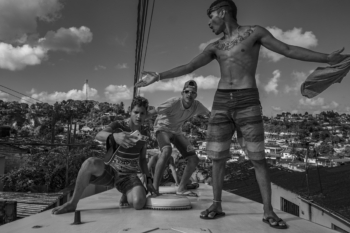 What makes risk fun? Is it knowing you can beat it? Is it competition? Is it a means of advanced self-actualization beyond what Maslow prescribed in your Psych 101 class? 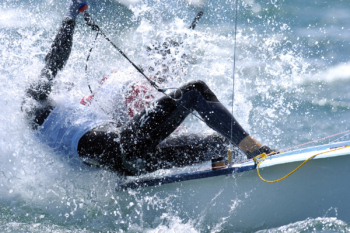 A gold medal was slipping out of reach. Champion sailor Paul Tingley was about to be overtaken from his already second place position in the Beijing Paralympics competition.Paul had tightened up and lost his natural more open, risk-taking style – the style that got him to the Beijing in the first place. As failure loomed, it only got worse.Fortunately, there was time for a reset. 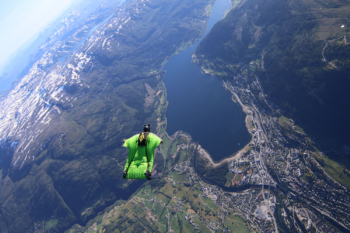